Jason was a resident of Farragut, Tennessee at the time of his passing.

He was a graduate of Farragut High School class of 1989.

Jason attended Pellissippi State Community College. He was a graduate of the National Truck Dealer's Academy. In lieu of flowers, memorials were made to Second Harvest Food Bank.

In 2009 an event was held in Jason's memory: The "Jablonski Jam" and auction was held 6-11 p.m. Saturday, June 13, at Rick's Place, 1637 Downtown West Blvd.Money raised from the auction benefited the Knox County Council PTA, which supports local children via the Clothing Center, the Teacher Supply Depot, etc. Brian and Piper Jolly and John Mason organized the event in memory of the late musician, Jason Jablonski. 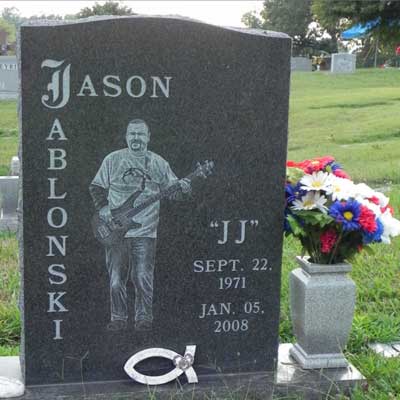 A RESOLUTION to honor the memory of Jason William Jablonski of Farragut.  WHEREAS, the members of this General Assembly were greatly saddened to learn of the untimely passing of Jason William Jablonski; and WHEREAS, Mr. Jablonski was an exemplary public servant and consummate professional who worked assiduously to improve the quality of life for his fellow citizens in numerous capacities; and WHEREAS, he served with acumen and alacrity as the General Manager of Landmark Trailers, a division of Landmark Trucks, Incorporated, in which position he earned the respect of his peers and customers alike for the exemplary quality of his work; and WHEREAS, a committed Christian, Mr. Jablonski was a 1989 graduate of Farragut High School and attended Pellissippi State Community College prior to graduating from the National Truck Dealer’s Academy; and WHEREAS, a devoted musician, avid fan of soccer and football, and dedicated soccer player, Jason Jablonski played the bass guitar in many local bands and gave freely of his time and energies in service as an Assistant Coach of the Powell High School soccer team and as the Commissioner of his fantasy football league; and WHEREAS, Mr. Jablonski was also deeply devoted to his family, and always endeavored to remain true to family values of the highest order; and WHEREAS, he was preceded in death by his grandparents, Tom and Muriel Booker and Leon and Clara Jablonski; and WHEREAS, he will be sorely missed by his parents, Jim and Diane Jablonski; his brother and sister-in-law, Andy and Terri Jablonski; his sister, Suzanne Rose, his nieces, Natalie Jablonski, NoLynn Jablonski, and Jessica Ann Rose; his aunts and uncles, Richard and Christine Jablonski, Beverly and Walter Weselak, and Nancy and Tony Fatta; his eight cousins; and his beloved dog, Bo; and WHEREAS, Jason Jablonski leaves behind an indelible legacy of integrity and probity in public life, compassion and loyalty in private life, and diligence and dedication in all his chosen endeavors; and WHEREAS, it is fitting that this General Assembly should pause to remember the bountiful life of this exceptional public servant and human being; now, therefore,

BE IT RESOLVED BY THE SENATE OF THE ONE HUNDRED FIFTH GENERAL ASSEMBLY OF THE STATE OF TENNESSEE, THE HOUSE OF REPRESENTATIVES CONCURRING, that we honor the memory of Jason William Jablonski, reflecting fondly upon his impeccable character and his stalwart commitment to living the examined life with courage and conviction. BE IT FURTHER RESOLVED, that we express our sympathy and offer our condolences to the family and loved ones of Mr. Jablonski. BE IT FURTHER RESOLVED, that an appropriate copy of this resolution be prepared for presentation with this final clause omitted from such copy.