Alice Hare Scott Mabry (1800-1843) was the daughter of James Scott, Sr. and Jane Adams. She was born in Blount County, Tennessee, April 30, 1800. She grew up in Blount County and later Knoxville. She married Joseph Alexander Mabry, Sr., December 4, 1820, in Knoxville. After her marriage the couple lived in the Concord, TN area. Mrs. Mabry was the matriarch of the Mabry family that became one of the largest plantations in the area, but the family was rocked by tragedy. Mrs. Mabry became a widow in 1837 after her husband, General Joseph Alexander Mabry was killed during an argument in Tuscaloosa, Alabama. The article below is from the Newark Daily Advertiser:

Mrs. Mabry died long before the second tragedy affected this large area family. Her son and grandson were also killed in an argument in October, 1882. At the time her son had become Mabry, Sr, and her grandson Mabry, Jr.

"The gunfight which left Joseph Mabry Sr, his son Joseph Jr, and Thomas O'Conner dead was immortalized in Mark Twain's book, "Life on The Mississippi." Thomas O'Conner was a bank president and one of the richest men in Tennessee. Following a business dispute, Joseph Mabry, Sr, a wealthy (and eccentric) businessman, threatened his life. The next day, O'Conner shot him dead on Gay Street in Knoxville. The victim's son, lawyer Joseph Mabry, Jr., was nearby. He and O'Conner became involved in a gunfight which left them both dead. Twain, intrigued by the story, recalled the event in Chapter 40 of his book, "Life on The Mississppi." 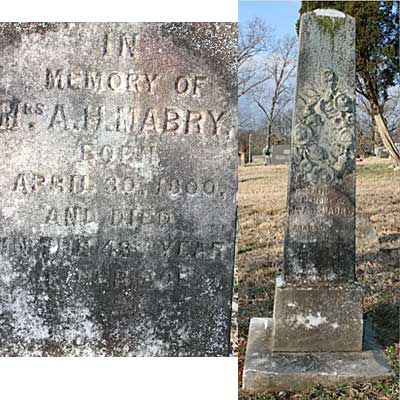