Danny Ray (Paw Paw) Malone, age 46, of Knoxville, passed away unexpectedly Thursday, October 26, 2006, while vacationing in Puerto Rico. Danny was whole heartedly devoted to his family He had a strong faith in God and attended Cornerstone Church of Knoxville. His gift of a giving heart and concern for the well being of everyone made him loved by all who knew him. He established Malone's Coffee Service in 1993 and was known as "Dan the Coffee Man," considering all of his customers his friends, as well. He was a man who experienced life fully, enjoying hobbies such as NASCAR, snow boarding and spending time with his family. Danny was preceded in death by his father, Billy Wayne Malone. He left behind his loving wife of 28 years, Sharon Malone, as well as his children, Danielle Malone, Carrie Reagan and husband John, Jessie DeRose and husband Austin, Blake and Tina Malone. He was blessed with three grandchildren, Kaylee and Johnna Reagan and Alexander DeRose. He also leaves his mother, Faye Jackson and husband Jake of Lenoir City, brothers, Ricky Malone of Lenoir City, Ronnie Smith of Knoxville, Chris Smith of Knoxville; sister, Billie Malone of Millington, Jamie Hopper of Memphis and many nieces and nephews. View the memorial stone ceremony at: 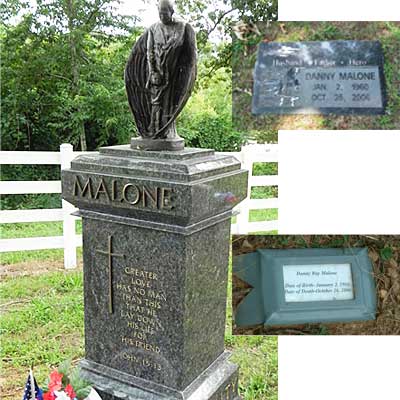