1918. A committee petitioned the state to erect a graveside monument of  Roane. Will Hackney, left, and Mathew Russell, 4th from left, are buried in Pleasant Forest.

Archibald Roane is without doubt the most famous burial at Pleasant Forest. His life was one of public service and family while serving as the second governor of Tennessee. 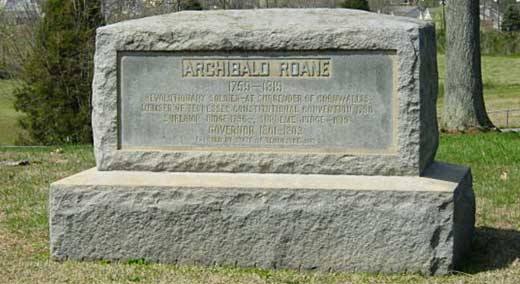 Archibald Roane, second governor of Tennessee, was born in 1760 in Lancaster County, Pennsylvania. He became a lawyer and served with distinction in the Continental Army during the Revolution. Roane arrived in Tennessee in 1788 in the aftermath of the Franklin movement and prior to the creation of the Southwest Territory. He settled first in Jonesborough and established a law practice there before moving to Jefferson County.

Roane's professional skills soon attracted the attention of Territorial Governor William Blount, who appointed him attorney general for the Washington District and confirmed his position as one of Blount's protégés. Roane enhanced his reputation when he became the tutor of Hugh Lawson White, son of the founder of Knoxville and a future presidential candidate. In 1796 Roane was selected as a delegate from Jefferson County to the Tennessee constitutional convention.

Roane became one of the first three judges of the Superior Courts of Law and Equity. In 1801, when John Sevier retired after his constitutional three terms in office, Roane was the nearly unanimous choice to replace him as governor--his opponent received fewer than a dozen votes statewide.

During Roane's administration, Tennessee expanded to three congressional districts, but his term of office is generally remembered more for factional confrontation and controversy than for growth. The first controversy centered on the vacant position of major general of the state militia. An election among the field officers to fill the position resulted in a tie, and Roane, as governor, was required by law to break the deadlock. The two candidates, John Sevier and Andrew Jackson, were well placed, ambitious, and unwilling to concede the highest military position in the state. Roane eventually gave the appointment to Jackson, a decision that surprised few, given the close friendship between the two men. Sevier believed his past military record made him the more qualified candidate, though, and his feud with Jackson escalated sharply. More importantly, Roane's support for Jackson prompted Sevier to seek reelection as governor in 1803.

In an attempt to assist Roane in his campaign against the popular Sevier, Jackson provided information which implicated the former governor in a series of land fraud schemes dating back to 1795. The evidence was embarrassing for Sevier but inconclusive to voters; Sevier won the election easily.

Following his defeat, Roane returned to his law practice until 1811, when he was elected as Circuit Judge. In 1815 he was elected as judge of the Superior Court of Errors and Appeals. He held that position until his death on January 18, 1819.  Roane County is named in his honor. 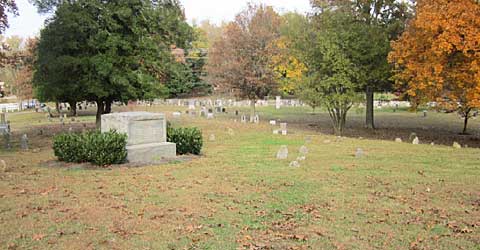 Archibald Roane may have been responsible for one of the most unusual duels ever fought. When he selected Andrew Jackson over John Sevier as State Militia Major General. Governor Roane solidified the hatred Sevier and Jackson had for one another...ultimately resulting in a duel.....of sorts.

As Middle Tennessee grew in size, a rift developed between Nashville and Knoxville. This was personified by a feud between Jackson and Sevier. Jackson had wanted the post of major general of the state militia, but had lost to a candidate favored by Sevier.

Then Jackson tried for the post again in 1802. This time his opposition was Sevier himself. Governor Archibald Roane broke a tied vote in favor of Jackson. When Roane was up for reelection, he was challenged by Sevier. Despite being accused of land fraud by both Roane and Jackson, Sevier won.

The hard feelings between Sevier and Jackson led to a verbal argument between the two that resulted in a duel in 1803 near Kingston.

There Sevier and Jackson shouted insults at each other, but fired no shots. 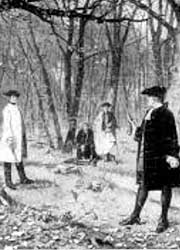 Archibald Roane was born in Derry Township, Pennsylvania, then a part of Lancaster County. He was the son of Andrew and Margaret Walker Roane. Andrew Roane, who was born in Ireland, was one of four sons of Archibald Gilbert Roane, a Scotsman who had been awarded land in Ireland in return for his British military service. All of the sons of Archibald Gilbert Roane emigrated to America. After Andrew and Margaret Roane both died when young Archibald Roane was about eight years old, he was raised by an uncle, John Roane, Presbyterian minister, who provided him with a good education.

During the Revolutionary War, Archibald Roane served in the Continental Army  as a member of the Lancaster County Militia (5th Company, 9th Battalion, Pennsylvania Volunteers). He was among the troops who took part in Washington's crossing of the Deleware River and the subsequent Battle of Trenton in December 1776, and was present at the surrender of Yorktown in 1781.

In the 1780s he settled for a time in vicinity of Lexington, Rockbridge County, Virginia, where he studied and later taught at Liberty Hall Academy, a predecessor institution to  Washington and Lee University. In Virginia, he married Ann (or Anne) Campbell, whom he had met there, in 1788.Shortly after his marriage in 1788, Roane moved to Jonesborough, Tennessee, then still a part of North Carolina, where he was admitted to the bar and began the practice of law.

He died at his plantation "Grassey Valley" nine miles south of Knoxville, Tennessee, near Campbell Station Tennessee. Governor Roane was the father of James, David, Mary, Andrew, Archibald, Annie, Margaret, & William Roane. Governor Roane was proceeded in death by his parents and several of his children. His son Dr, Andrew Campbell Roane was in charge of closing his estate. His wife Ann Campbell Roane lived with their son James Roane in Nashville Tennessee until her death in 1831 & is burried in Nashville Tennessee.