David Campbell, who owned much of the land in the fertile region call Grassy Valley, donated a portion of it for the purpose of erecting a "Meeting House," as churches were then called. A school building at the location was about one and one quarter mile east of Campbell Station in a grove. It was given the name of Pleasant Forest. 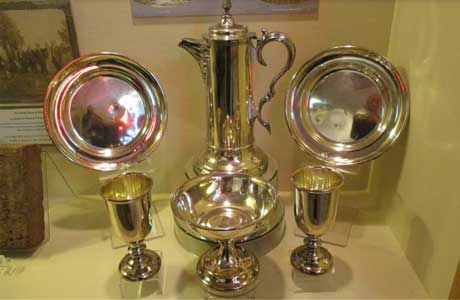 Silver set used by Pleasant Forest Church, donated by John Steele Campell to the Farragut Folklife Museum. This set was given to his ancestors when the church moved to Virtue Road in the 1870-1880 period.

A shed was erected as a temporary place of worship, later becoming a log building. In 1796, a Presbyterian church was organized by the Reverend Samuel G. Ramsey, a noted Presbyterian minister, who was also the pastor of the church for several years. Other noted ministers  who served the church were Reverend Samuel Doak, D.D., pioneer minister, and educator of East Tennessee, and Reverend James Park, who for 50 years was pastor of the First Presbyterian Church of Knoxville. The first elders of Pleasant Forest Church were James Campbell, Elder David Campbell, Pleasant J. Temple, David I. Alexander, William M. Smith, James W. Seaton, James W. Craig, Sr., and David Smith. This church, at the time of its organization, was comprised of two congregations, known as "Pleasant Forest" and "Ebenezer."

In the year 1833, a separation occurred, and the dual church became two distinct organizations. The old log building, which was replaced in 1835 by a brick building, is said to have been the first brick church erected in Knox County outside the City of Knoxville. The brick building was used until about 1862 when it was torn down by the armies of the Civil War who were encamped nearby. The soldiers used the bricks to build chimneys for their barracks. A new frame building was erected in 1871 and used until 1892 when regular services were discontinued.  Occasional services were held until 1910 when the Pleasant Forest Church was consolidated with the Concord Presbyterian Church.

Pleasant Forest Cemetery is also historic as it is one of the oldest cemeteries in this part of the state. Many of the early pioneer settlers of this community - noble men and women who endured the trials and hardships of pioneer life - are buried within its grounds. Notable among those buried in Pleasant Forest are Archibald Roane, Second Governor of Tennessee; Elder David Campbell; and Lieutenant Thomas Boyd, Revolutionary War veteran, who was with George Washington at Valley Forge in 1777.
Descendants of David Campbell and Lieutenant Boyd are prominent residents of the Farragut community.

For the complete history of Pleasant Forest....READ MORE....