"The Prettiest Little Fight Ever Fought"

On Nov. 4, 1863, Lt. Gen. James Longstreet - with two divisions, about 5,000 cavalry and approximately 12,000 troops- was detached from the Confederate Army of Tennessee near Chattanooga to attack Maj. Gen. Ambrose E. Burnside's Union Department of the Ohio troops at Knoxville. Knoxville was a vital stronghold for both armies as it was where supplies for the South were brought in from Virginia by rail.

Although opposing forces first confronted each other briefly at Loudon, it was just the start of the race to Knoxville. With approximately 5,000 troops, General Burnside's Union forces, although greatly outnumbered by Longstreet's troops, were ordered to draw the Confederate army to Campbell Station and delay their advance to Knoxville. This strategic site was chosen by Burnside as a defensive location due to its high ground.

On a cold and miserable Nov. 16, the battle began. Under General Burnside, the Union troops arrived first with barely enough time to set up defenses on the high ground near the present day intersection of Concord Road and Kingston Pike. After six hours of heavy fighting, the Confederates failed to break through the Union line, and night fell. Total casualties were about 348 Confederate and338 Union troop.

Delaying the Confederate forces enabled the Union troops already in Knoxville to prepare fortifications. Through the night Burnside's division continued to race Longstreet toward Knoxville, taking them away from General Braxton Bragg to the south. Successful in their mission to delay the Confederate's offensive, Union troops continued to Knoxville to join forces in the successful defense of the city. The Battle of Campbell Station was described by one officer as being, from the beginning to end, the "prettiest little fight" ever fought. 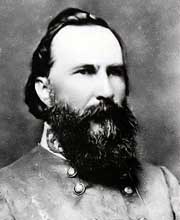 One of the foremost Confederate generals of the American Civil War and the principal subordinate to General Robert E. Lee, who called him his "Old War Horse." He served under Lee as a corps commander for many of the famous battles fought by the Army of Northern Virginia in the Eastern Theater, but also with Gen. Braxton Bragg in the Army of Tennessee in the Western Theater. 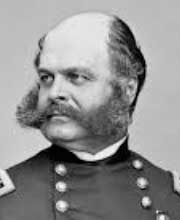 Ambrose E. Burnside was a major general  in the Union army during the American Civil War. Burnside was one of four men to command the Army of the Potomac in Virginia. After the war, Burnside briefly served as Senator from the state of Rhode Island. The distinctive facial hair he wore throughout most of his life led to the identification of that form of facial hair by the modern name - sideburns - created from his last name.