History tells us that the State of Franklin entered into an agreement with the Cherokees in 1785 which opened to settlers new lands along the French Broad and Holston Rivers. The agreement, known as the Dumplin Creek Treaty, was followed by a rush of settlers down these rivers. One of these, James White, settled temporarily about four miles above the mouth of the French Broad and in 1786 moved down-river and established a fort, later to become Knoxville. 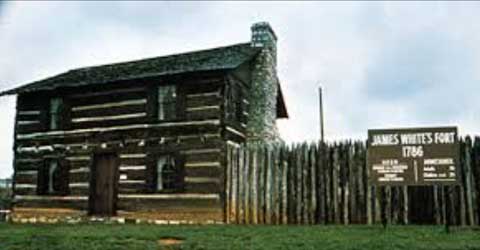 In 1787, Camptain David Campbell, with Archibald McCaleb, Alexander and “Elder” David Campbell, and Jonathan Douglas arrived from Greene County with their families and settled about 15 miles west of White’s Fort on Turkey Creek about two miles north of the Tennessee River which was then called the Holston. The following spring the Campbell’s Station folk were joined by James Campbell and Robert Balckburn and their families, and by Joseph Taylor.

The preceding is to set the state for presenting the Campbell’s, the families principally responsible for the founding of Campbell’s Station and Pleasant Forest Church and Cemetery. Campbell family history can be traced back to Alexander Campbell of Invary, Argylshire, Schotland, whose son William married Mary Byers and removed to the Ulster District of Northern Ireland near Londonderry. They emigrated to America with seven children, settling in Augusta County, Virginia. Among their eight children (the eighth born in America) were David, father of Captain or Colonel David Campbell, founder of Campbell’s Station and Robert, the father of Alexander, David and James Campbell whose families were in the original company at Campbell’s Station.

Colonel (or Captain) David (1753-1832)  was the son of “Black” David Campbell, so-called to distinguish him from his kinsman “White” David Campbell, of fairer complexion and grandson of William and Mary Byers Campbell. By 1798, a small schoolhouse and a church were erected on Colonel Campbell’s land.