Killed in the Fraterville Mine Explosion at Coal Creek, Tennessee

Ernest Wallace had only been married three years when he was killed in the Fraterville Mine Explosion in Coal Creek, Tennessee. He left behind his widow, Berthine. Their lives had been hit by tragedy before...they had buried two babies in three years and had no living children at the time of Ernest' death. The mine had a history of hiring workers from a single extended family, and there were seven other miners killed that day with the surname Wallace. It is unknown if they were related to Ernest. 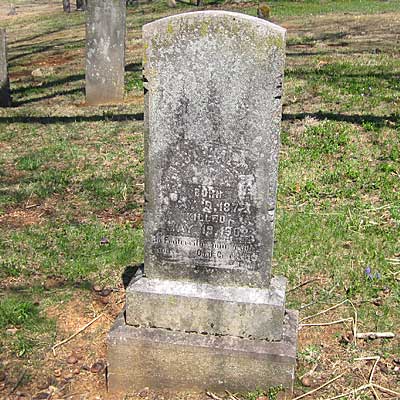 The Coal Creek Coal Company, organized by Knoxville businessman E.C. Camp, began work at the Fraterville Mine in 1870. Coal Creek Coal developed a reputation for fair contracts and fair pay, and the company's Fraterville Mine was considered one of the safest in the region. The company never took part in the state's controversial convict leasing system and paid in cash (rather than scrip), and thus avoided much of the labor unrest that plagued neighboring mines during the Coal Creek War in the early 1890s.
According to the Tennessee Commissioner of Labor, the Fraterville Mine explosion occurred around 7:20 on the morning of May 19, 1902. The explosion shot black smoke and debris out the mine's mouth and ventilation shaft. Rescue efforts were organized by the mine's superintendent, George Camp, and a Welsh mine operator from nearby Jellico named Philip Francis. The initial rescue party penetrated to just 200 feet (61 m), however, before they were forced to turn back and await the dispersal of toxic gases. A second rescue party entered the mine at 4:00 that afternoon, and using a makeshift venting system made of cloth and creosote, they inched their way into the main shaft, where they observed the destruction, later reported by the Commissioner:
Battrices had been destroyed, and along the main entry the force of the explosion was terrific, timbers and cogs placed to hold a squeeze were blown out, mine cars, wheels, and doors were shattered, and bodies were dismembered.
Most of the miners were killed by the initial impact of the explosion, although 26 had managed to barricade themselves in a side passage. At least 10 were still alive seven hours after the explosion, but eventually succumbed to toxic air and lack of oxygen. Several miners wrote farewell messages to loved ones shortly before dying, stating they were struggling for air, and encouraging their families to "live right" so they would meet again in heaven. The last body was removed from the mine four days after the explosion.

The cause of the explosion was a matter of controversy. The report issued by the Tennessee Commissioner of Labor stated that the explosion occurred when volatile gases that "had accumulated because of inadequate ventilation" were ignited by an open light. While the report stated that the shutdown of the mine's ventilation system over the previous weekend had allowed the dangerous build-up of the gases, ventilation furnace operator Tip Hightower was acquitted of negligence at a subsequent inquest. The report also suggested that gases had leaked into the Fraterville Mine from an adjacent abandoned (and unventilated) mine once operated by the Knoxville Iron Company. Along with Hightower, superintendent George Camp was also charged with negligence, but was acquitted after several hours of tearful testimony.
The community of Fraterville was devastated by the mine explosion. The town lost all but three of its adult males. Hundreds of women were widowed, and roughly a thousand children were left fatherless. Some families lost as many as eight family members